A sailfish is a fish of the genus Istiophorus of billfish living in colder areas of all the seas of the earth. They are predominantly blue to gray in colour and have a characteristic erectile dorsal fin known as a sail, which often stretches the entire length of the back. Another notable characteristic is the elongated bill, resembling that of the swordfish and other marlins. They are, therefore, described as billfish in sport-fishing circles. 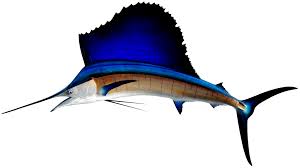 A highly rated game fish, the black marlin has the power, size, and persistence of which anglers dream.

The black marlin is a species of marlin found in tropical and subtropical areas of the Indian and Pacific Oceans. With a maximum published length of 4.65 m (15.3 ft) and weight of 750 kg (1,650 lb), it is one of the largest marlins and also one of the largest bony fish. It is one of the fastest fish species as well, having been recorded unwinding fishing line at 129 km/h (80 mph). Black marlin are fished commercially and are also a highly prized game fish.

Found in tropical and warm temperate waters of the Indian and Pacific oceans, the striped marlin is pelagic and seasonally migratory, moving toward the equator during the cold season and away again during the warm season.

The striped marlin is a species of marlin found in tropical to temperate Indo-Pacific oceans not far from the surface. It is a desirable commercial and game fish with a record weight (in 1982) of 190 kg (420 lb) and a maximum length of 4.2 m (13.8 ft). The striped marlin’ is a predator that hunts during the day in the top 100 m or so of the water column, often near the surface. One of their chief prey is sardines.

Caught Year Round with peak season of June ? October This pelagic and migratory species occurs in tropical and warm temperate oceanic waters. A powerful, aggressive fighter, they run hard and long, sound deep, and leap high into the air in a seemingly inexhaustible display of strength.

The Indo-Pacific blue marlin is a species of marlin belonging to the family Istiophoridae. In Hawaii, the fish is known as a’u. In the Pacific, blue marlin (then known as silver marlin or often misidentified as the related black marlin) were caught by author/angler Zane Grey in Tahiti in the 1930s.

Available Year Round. Occurs worldwide in deep, warm temperate oceanic waters. It is both pelagic and seasonally migratory, but has been known to come fairly close to shore. It is highly esteemed both as a sport fish and as table fare.

The yellowfin tuna is a species of tuna found in pelagic waters of tropical and subtropical oceans worldwide. Yellowfin is often marketed as ahi, from the Hawaiian ʻahi, a name also used there for the closely related bigeye tuna.

Not as common as most species, but caught every once and a while. Found worldwide in tropical and warm temperate seas, Pelagic and seasonally migratory. There are indications of seasonal concentrations off the Pacific coasts of Panama, Costa Rica, Nicaragua and Baja California in the summer months.

Wahoo is a scombrid fish found worldwide in tropical and subtropical seas. It is best known to sports fishermen, as its speed and high-quality flesh make it a prize game fish. The flesh of the wahoo is white to grey, delicate to dense, and highly regarded by many gourmets. The taste has been said to be similar to mackerel. This has created some demand for the wahoo as a premium-priced commercial food fish.

An exciting catch available year round, but predominantly in prime fishing months. Occurs in the eastern Pacific Ocean from the Gulf of California to Peru. An in shore species, it is found in the surf, over sandy bottoms, and in moderate depths. When hooked or in pursuit of prey it will raise its dorsal fin like a flag and leap repeatedly.

The roosterfish is a game fish found in the warmer waters of the East Pacific from Baja California to Peru. It is the only species in the genus Nematistius and the family Nematistiidae. It is distinguished by its “rooster comb”, seven very long spines of the dorsal fin.

The roosterfish has an unusual arrangement of its ears: the swim bladder penetrates the brain through the large foramina and makes contact with the inner ear. It uses its swim bladder to amplify sounds.

Roosterfish can reach over 1.6 m (5 ft 3 in) in length and over 50 kg (110 lb) in weight. The weight of the average fish hooked is about 20 lb (9.1 kg). The fish is popular as a game fish, but it is not considered a good eating fish. Catch and release is strongly recommended.

Game fish are fish pursued by recreational anglers. They can be freshwater or saltwater fish. Game fish can be eaten after being caught. 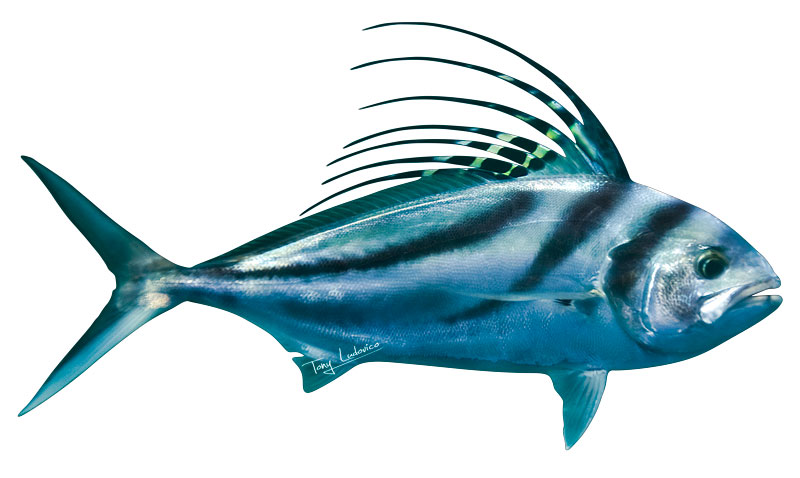 There are over a dozen types of snappers available in our waters. One of the most common is the red snapper. Adults are more plentiful offshore in 60 to 440 ft of water associated with rough, rocky bottoms and wrecks.
Sebastes miniatus is a species of rockfish known by the common names vermilion rockfish, vermilion seaperch, red snapper, red rock cod, and rasher. It is native to the waters of the Pacific Ocean off western North America from Baja California to Vancouver Island.

The body of the vermilion rockfish is moderately deep and compressed. The upper profile of the head is somewhat curved; the mouth is large, with the lower jaw slightly projecting. The color is bright red on the body and fins; many with black and gray mottling on back and sides. On fish shorter than 12 inches (30 cm) the mottling is much more apparent and the fins are often edged with black.

Many Grouper Species are found just off the coast! When hooked grouper are dogged opponents that must be turned quickly before they retreat to cover.

Groupers are fish of any of a number of genera in the subfamily Epinephelinae of the family Serranidae, in the order Perciformes.
Not all serranids are called groupers; the family also includes the sea basses. The common name grouper is usually given to fish in one of two large genera: Epinephelus and Mycteroperca. In addition, the species classified in the small genera Anyperidon, Cromileptes, Dermatolepis, Gracila, Saloptia, and Triso are also called groupers.

Fish in the genus Plectropomus are referred to as coralgroupers. These genera are all classified in the subfamily Epiphelinae. However, some of the hamlets (genus Alphestes), the hinds (genus Cephalopholis), the lyretails (genus Variola) and some other small genera (Gonioplectrus, Niphon, Paranthias) are also in this subfamily, and occasional species in other serranid genera have common names involving the word “grouper”.

Nonetheless, the word “grouper” on its own is usually taken as meaning the subfamily Epinephelinae

The Fishing in Quepos, Costa Rica is good year around, in every Season!

The Quepos Fishing Seasons do have several peak months for both Bill Fish and inshore species, so we recommend taking a look at our Fishing Seasons Chart. Each species of fish has a time during the year, when it can be found in large groups in either the offshore, or inshore fishing grounds of Quepos, Costa Rica.

To provide further insight let’s take a look at each species coupled with the months that you are guaranteed to enjoy an excellent fishing season.